1642 – 1727
Newton was an English physicist, mathematician, astronomer, natural philosopher, alchemist, and theologian, who has been "considered by man to be the greatest and most influential scientist who ever lived." In this work, Newton described universal gravitation and the three laws of motion, which dominated the scientific view of the physical universe for the next three centuries. Newton showed that the motions of objects on Earth and of celestial bodies are governed by the same set of natural laws, by demonstrating the consistency between Kepler's laws of planetary motion and his theory of gravitation, thus removing the last doubts about heliocentrism and advancing the Scientific Revolution.

1809 – 1882
Darwin was an English naturalist. He established that all species of life have descended over time from common ancestors, and proposed the scientific theory that this branching pattern of evolution resulted from a process that he called natural selection. Darwin published his theory with compelling evidence for evolution in his 1859 book On the Origin of Species. 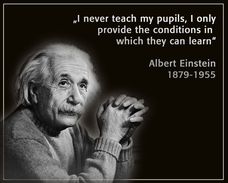 1879 –  1955
Albert Einstein was born in Germany. He was a  physicist who developed the theory of general relativity and won the Nobel Prize for Physics in 1921 for his explanation of the photoelectric effect. Einstein is considered the most influential physicist of the 20th century and "the father of modern physics,". He is best known for his mass–energy equivalence formula E = mc2 (which has been dubbed "the world's most famous equation")

1847 –  1922
Bell was an eminent scientist, inventor, engineer and innovator who is credited with inventing the first practical telephone.

1564 - 1642
He was the first to use the telescope for furnishing evidence that the Earth revolves around the Sun. This postulate was in contrast to that held by the majority.

1571 - 1630
Kepler compiled the Mars data which enabled him to propose the "Three Laws
of Planetary Motion".

1822 - 1895
Some of his works are: separation of mirror image molecules and effect of polarized light, and identification of the parasite that was killing silkworms.

1889 - 1953
"Hubble's Law" stated that galaxies move away from each other at a speed determined by the distance that separated them. He classified galaxies as per their distance, shape, brightness patterns and content.

287 - 212 BC
His major achievements are "The Archimedes principle in hydrostatics", the Archimedes screw and the relation between the surface and volume of a sphere and the circumscribing cylinder.

384 - 322 BC
His works include Physics, Metaphysics, Politics,Poetics, Ethics and De Anima.

1473 - 1543
He theorized that the Sun was the fixed point around which the motions of The planets takes place. The Earth rotates around its axis once in a day and slow alterations in the direction of this axis cause the precession of the equinoxes.

1833 - 1896
He was a chemist, engineer, innovator, and armaments manufacturer. He is also the inventor of dynamite. He established a fund for the yearly Nobel prize in the areas of chemistry, physics, literature, international peace and medicine.

1818 - 1889
One determines the rate at which heat is produced by an electric current by using Joule's law.

Julius Robert von Mayer
1814 - 1878
Along with James Joule, he discovered the first law of
thermodynamics.

Henry Bessemer
1813 - 1898
He invented an economical steel-making procedure that burnt off impurities.

Robert Bunsen
1811 - 1899
He developed the spectroscope and discovered Cesium and Rubidium.

Thomas Graham
1805 - 1869
He developed a technique to separate crystalloids from colloids, which is called "dialysis".

Johann Wolfgang Dobereiner
1780 - 1849
He determined the relation between elements and their atomic weight.

Amedeo Avogadro
1776 - 1856
He concluded that equal volumes of gases at similar conditions of temperature and pressure have the same number of molecules.

William Henry
1773 - 1841
Henry's Law states that the amount of gas absorbed by water increases as the gas pressure rises.

Antoine Lavoisier
1743 - 1794
He recognized and named oxygen and disproved the phlogiston theory.

Robert Boyle
1627 - 1691
The Boyle's law describes the inversely proportional relationship between absolute pressure and volume of a gas, that is, if the temperature is constantly maintained in a closed system